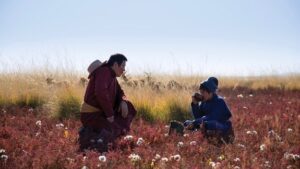 Veins of the World – the most successful film of the third mini-season, with an overall score of 84.7%. Some of the comments received: