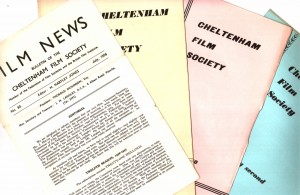 Cheltenham Film Society is one of the oldest and most successful membership film societies in the country. It was founded in the final days of the last war, when 450 Cheltonians met at the old School of Art in the lower High Street and agreed on a constitution for a club to show serious films ignored by the town’s five commercial cinemas.

For the first three seasons CFS had 1,100 members, making it the fifth largest society in the country. Also under the CFS umbrella in the early days were the Amateur Cine Group and the Scientific Film Group. It also produced Film News, initially monthly; there was a CFS library of film books; there were talks at leading schools (Lindsay Anderson returned to his alma mater, Cheltenham College); and there was a ‘Third Programme’ of highbrow films with discussions afterwards.

Television, and particularly commercial television, caused the society to shrink, as it did many institutions. CFS had originally sold tickets for individual films. Now it moved to a flat fee (“21 films for 21 shillings”) but it no longer had any way of knowing which films its membership actually enjoyed. So in 1970 it introduced the rating system that survives today, although originally there were only three grades: A (excellent), B (good) and C (poor).

In 1971, the society moved its screenings from the Playhouse to Dean Close School but otherwise continued unchanged until the early 1980s when it missed the only season in its 75-year history when the committee collapsed. In 1988 it moved to the Shaftesbury Hall Theatre and then, at the start of the 1992/3 season, back to Dean Close’s New Theatre, later renamed the Bacon Theatre.

CFS is currently as successful as it has ever been. Its membership, around 450 strong, may be the largest in the country.