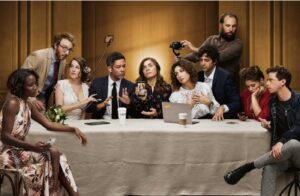 Selfie, a wry French comedy examining our increasing dependence on digital technology, is available to watch as part of CFS Online until 23 May. And to accompany the film, YourScreen have an exclusive Zoom interview with actress Fanny Sidney, one of the stars of the hugely popular Netflix series Call My Agent. And yes, YourScreen really did have to call her agent to set this up!

The Humorist is a delicious satire about the Soviet Union in 1984 that summons up its time and place, and the muted affluence of its hero, tormented stand-up comedian Boris, to great effect. As Boris, Aleksey Agranovich delivers an acting masterclass in which his droll delivery of perfectly timed lines and his careworn facial expressions (think Lenny Bruce meets Rowan Atkinson) precisely characterise the cynicism and trapped despair which drive the brilliant but jaded comedian to risk all. Click here to watch YourScreen’s Chris Baker in conversation with The Humorist director Michael Idov.